Or "Dracula (the fucked-up vampire flick)."

In the caves of an abandoned mine, Mike Waters is looking for "Mr. Alucard." Instead, he finds a Count Dracula with a Jewish accent: "I'm Count Dracula which is Alucard backwards. So you can call me Allie."

Wearing a hairpiece that resembles a dead skunk, Dracula hypnotizes Mike: "I want for you to go out and get me, every night, a different girl. You like to do that for me, hmmmm? You'll have fun! What's left over, I give you. I'm going to make you a jackalman. Irving Jackalman. That's what I'm gonna call you from now on."

Mike then turns into a mangy wolfman. Pardon me, a jackalman. (The makeup looks like the same goofy mask and three-fingered claws used in the 1967 monsters-loose-in-Las-Vegas epic, The Mummy and the Curse of the Jackal). Growing a big snout that makes him look like a giant rodent, "Irving" immediately starts attacking women who are just as immediately transported back to Dracula's cave. There, Drac strips 'em naked, ties 'em to a rack, and bites them on the boob -- "I'm gonna give you a kiss like you wouldn't believe. Right here in your good place!" -- leaving two bloody bite marks right above the nipple...

As becomes quickly apparent, Dracula (the dirty old man) is really two films in one. Visually, it's a crude but nevertheless seemingly serious and straightforward sex horror film that even occasionally detours into Rollin-like territory with its slam-fisted imagery of nude women bound and bitten on the breasts by bats (minus, of course, Rollin's style, wit, or sense of poetry). The soundtrack, however, is something else entirely. A la Woody Allen's What's Up Tiger Lily? (1966), the original dialogue has been discarded (assuming it was even recorded; this could just as easily have been shot silent) and replaced with idiotic "comic" narration that often sounds like the narrator is making things up as he goes along. A couple of times he even cracks up at his own jokes.

But even the narrator doesn't know what to do with one bludgeoning sick sequence where the dumb-looking werejackal jumps atop a nude woman and rapes her into unconsciousness. While continuing to hump away, the woman eventually comes to and starts to struggle, so the big bad wolf kills her by bloodily biting her in the throat... then continues to happily screw the corpse.

Watch Here
Posted by Gatekeeper at 08:48 No comments:

It's a bad omen of things to come when the bus driver, transporting several people to a new job on an elegant estate, falls dead at the wheel. The passengers decide to delay their arrival by a day and detour to a small village for a good night's rest. Arriving, they find a deserted community. Luis (Jack Taylor), another man who found his way to the town earlier in the day, is equally bewildered. Ernest (I. Gonzalez), one of the men who ventures out that night for a smoke and a stroll, finds out the hard way that the town actually comes alive at night - with the undead. The next morning, the survivors awaken to a village more like a village should be. They are greeted by Boris (Jose Guardiola), or, the Major, as he's better known. He explains that the death of a beloved member of the community placed all the citizens in the cemetery the previous night. As the villagers anguish in the background over what to feed their guests, Boris says simply; "The Countess will provide." The weary travelers later rave about the unusually sweet and tender meat they're treated to...

Ernest returns...changed. He whispers to Marcos (Manuel de Blas), one of the other men from the bus, that the problem of the driver's corpse has been dealt with. Marcos, in turn, telegraphs just what likely happened to him. As they prepare to take their leave, Luis finds his car out of commission. Ernest is also unable to get the bus started and the group must return to the village. They soon find themselves at the home of the Countess, a charming woman who seems hungry for companionship and news from the outside world. She offers the stranded company the use of her home - and even some cash to tide them over. That night she takes young Cesar (David Aller) to her bed and vampirizes him, throwing his body off the balcony and into the courtyard below where some hungry vampires wait to devour him. Ernest lures two of the men outside with news that the bus is fixed. Entering, the door slams shut and the undead pop up from the seats, hungrily feeding on the unwitting victims.

The lovely Alma (the lovely Dianik Zurakowska) has been remarkably immune from all the grisly happenings, that changes when she finds a finger in her evening meal, courtesy of a recent "accident" by the cook. She, along with Luis, make plans to leave that evening with another woman from the ill-fated bus trip and her daughter, Violet (Sarita Gil). But before they can depart, Violet defies orders and goes out to play with her mysterious little playmate (Fernando Romero) who's led her off into the graveyard - and night is approaching.


Watch here
Posted by Gatekeeper at 08:45 No comments: 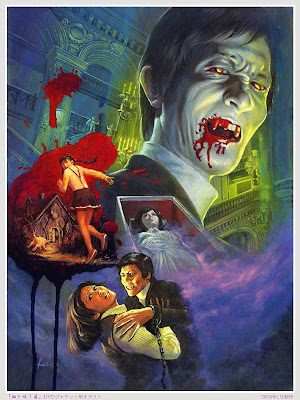 Akiko Kashiwagi (Midori Fujita) has been haunted by recurring dreams since childhood stemming from an incident at Lake Fujimi when her cocker spaniel broke free and entered a forbidding house populated by a couple of very fearsome residents. Now grown and a painter, she's at the lake and seeking the assistance of Kyusaku, a local handyman, for an issue with her door. He's just received an empty oblong box from Dracula (Shin Kishida) with only a blood stain within. Soon a young woman is found by the side of the road, drained of blood and with two puncture wounds on her neck, barely clinging to life.

Akiko has since gotten another dog, a German shepherd also named Leo, and one day she returns home to find him missing from his house. Searching for him, she finds him dead, the handyman looking on with a blank expression on his face. He attacks Akiko and carries her away. Awakening, she finds herself menaced by the box's daytime occupant. People are acting strangely - Akiko's sister, Natsuko (Sanae Emi) is aloof and remote, having been vampirized by the lake's newest tenant. And the girl at the hospital attempts to leave, grapples with a security guard and plunges over a railing to the ground. Akiko's boyfriend, Dr. Saeki Takashi (Osahide Takahashi), shocked by the bizarre death of his patient, begins to suspect a connection in the string of incidents. Natsuko arranges for Saeki to be out of the house that night that she might present Akiko to Dracula. But Saeki finds an unpleasant surprise of his own in the backseat of his car as a violent thunderstorm rages.

Natsuko is found on the beach in a state similar to the mystery girl. Rushed to the hospital by Akiko and Saeki, the wounded woman implores the pair to see that her body is burned upon her death. Saeki places Akiko under hypnosis in hopes of effecting a cure and to see what connection there may be between her nightmares and the current string of attacks and deaths. Feeling progress being made, the pair return to Akiko's hometown and the site of the first incident. Entering the house, they find the body of an old man, his journal - and Natsuko. This is one of Ivan Cardoso's first films - shot totally in Super 8mm! It's a parody of the old-age vampire story, but this time Nosferato (Torquato Neto) decides to feed on the bikiniclad beauties lying on the beaches of Rio de Janeiro (land of the string bikini, mind you!) Lots of laughs, skin and an ingenius use of locations!

What a terrible piece of crap! I' ve ever seen worse FX (what effects?) and stunts, even for the 70's, and the "plot" is thin as a shoe-string. You only see Nosferatu running around chasing girls and then bite them - that's (nearly) all. At one point he can even be spoted on the beach, dressed only in a cape and his swimming trunks! The film was shot on 8mm, the (historical) first part is in black & white, but the second half doesn't look much better with it's grainy and faded-out colors. No dialogue here, but it has rock music dubbed in where the dialog is supposed to be. In the end he leaves on a plane for Europe - could this the origin of our legend?


Watch Here but trust me it is crap
Posted by Gatekeeper at 08:39 No comments: 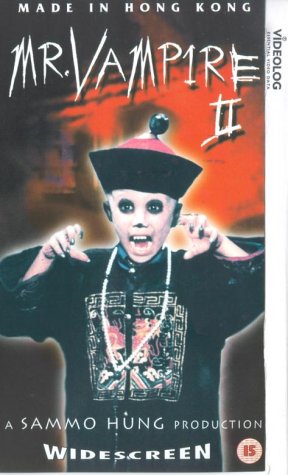 Set in modern day Hong Kong, Lam Ching-ying is a Chinese herbalist who battles a family of three vampires after they are re-awaken by some money-hungry archaeologists. Chin Siu-ho plays a photographer who helps Lam and Billy Lau plays one of the head archaeologist’s assistants.

Watch Here
Posted by Gatekeeper at 08:34 No comments:

The Countess is called away to tend a sick friend and imposes on the General to accept her daughter Marcilla as a houseguest. Some of the villagers begin dying, however, and the General's daughter Laura soon gets weak and pale, but Marcilla is there to comfort her. The villagers begin whispering about vampires as Marcilla finds another family on which to impose herself. The pattern repeats as Emma gets ill, but the General cannot rest, and seeks the advice of Baron Hartog, who once dealt a decisive blow against a family of vampires. Well, almost.

Posted by Gatekeeper at 08:31 No comments:

Posted by Gatekeeper at 08:29 No comments:

None of the films or albums on this blog are uploaded by myself. They have been found on google or public downloadsites. It's not my intention to support illegal film (music) this is to let people know which film is worth watching/buying. The film shown here should be removed in 24 hours after downloading. The film on this blog is intended for review purposes and should not be seen as a substitute for the original, legal, RIAA approved, record company enriching product. If you like the film or album, buy it. If you don't like, delete it.